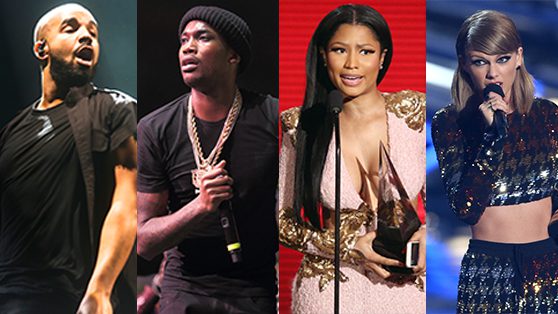 What would a year in pop culture be without famous adults behaving like high school students? Here are the 14 biggest celebrity feuds of 2015, courtesy of Entertainment Tonight:

1. Taylor Swift vs. Nicki Minaj. Nicki called out MTV when “Anaconda” wasn’t nominated for Video of the Year at the VMAs, claiming it was because she isn’t a “different ‘kind’ of artist.” Taylor took personal offense and tweeted that it was “unlike” Nicki to “pit women against each other.” (Taylor later apologized, saying she “missed the point, misunderstood, then misspoke.”)

2. Nicki Minaj vs. Miley Cyrus. Miley accused Nicki of trying to start a “pop star war” with her VMA comments and called the rapper “not very polite.” This resulted in Nicki calling out Miley on live TV, asking, “And now, back to this b*tch that had a lot to say about me the other day in the press. Miley, what’s good?”

3. Drake vs. Meek Mill. During a Twitter rant, rapper Meek Mill (who also happens to be Nicki Minaj’s boyfriend) claimed Drake “don’t write his own raps!” Instead of engaging on social media, Drizzy eviscerated Meek on not one, but two diss tracks, including the Grammy-nominated “Back to Back.”

4. Zayn Malik vs. One Direction. Zayn’s departure from 1D seemed amicable enough… until he and Louis Tomlinson began beefing on Twitter. It actually started as a feud between Louis and Naughty Boy, before Zayn chimed in with, “@Louis_Tomlinson remember when you had a life and stopped making b**chy comments about mine?”

5. Channing Tatum vs. Alex Pettyfer. Alex, who was absent from Magic Mike XXL, claimed it was “because Channing Tatum does not like me.” The actor recalled how he rented an apartment from one of Channing’s friends but didn’t pay rent. “I got a very negative email from Channing,” he alleged. “Saying, ‘Don’t f**k my friends. You owe money. Pay the fu**ing money. Don’t be a clown.'”

6. Julianna Margulies vs. Archie Panjabi. Julianna and Archie did not appear in a single scene together for three seasons of The Good Wife. And when they finally “reunited,” they shot their parts separately. Julianna rebuffed rumors of an on-set feud, saying, “People just like to have gossip,” and claimed Archie was filming another series at the time. This prompted Archie to finally speak out, tweeting, “I was in New York ready to film the scene!”

7. Vivica A. Fox vs. 50 Cent. When asked what she thought of her ex, 50 Cent, saying that Empire’s ratings dipped because of the “gay stuff,” Vivica shot back, “First of all, you know, um, pot calling kettle black is all I’m saying.” To which Fiddy responded, “Now she thinks I’m gay because I let her lick my a**. LMAO. Wait, I didn’t want her to, she forced me, my hands were tied. 50 shades of grey.”

8. Giuliana Rancic vs. Zendaya. Giuliana joked on Fashion Police that Zendaya’s dreads made her look like “she smells like patchouli oil or weed,” which the Disney star called “outrageously offensive.” “There is already a harsh criticism of African-American hair in society without the help of ignorant people who choose to judge others based on the curl of their hair,” she explained. Giuliana was quick to apologize.

9. Khloe Kardashian vs. Amber Rose. This actually should have been Amber vs. Kylie Jenner, after the model criticized the then 17-year-old’s relationship with Tyga, who was 25. Instead, Khloe blasted Amber, tweeting, “‘I was a stripper since I was 15 years old,’ Amber Rose told Foxx. Please don’t worry about my sister who has a career & her s**t together at ONLY 17.”

10. Erykah Badu vs. Iggy Azalea. While hosting the Soul Train Awards, Erykah joked that rappers were not welcome, then pretended to take a call from Iggy and said, “Hey! No, no, no. You can come, ‘cause what you’re doing is definitely not rap.” Iggy later tweeted, “We are days from 2016, but I came online today and saw its still cool to try and discredit my 2014 accomplishments. LOL, f**king hell.”

12. Ronda Rousey vs. Justin Bieber. The UFC fighter declared that she was no longer a Belieber after he was “really rude” and “totally snubbed” her 16-year-old sister at Cannes. Smartly, Bieber apologized. “Supposedly she asked for a picture with her sister and I guess I said no,” he told ET. “I don’t remember this happening but, Ronda, I’m sorry. Don’t kick my a**.”

13. Justin Bieber vs. Bette Midler. After Biebs’ nude pictures leaked, his dad tweeted, “what do you feed that thing. #proud daddy.” Rightfully disgusted, Bette tweeted, “I think the biggest d**k in this situation is the dad who abandoned his son.” Justin responded, saying, “This Britt Meddler, I don’t even know who that is, honestly.” To which Bette quipped, “Britt Meddler! I don’t know who that is either! But damn that b**ch!”

14. Ariana Grande vs. America. The pop diva licked (and thus contaminated) a tray of unpurchased, perfectly good doughnuts, then declared upon seeing a different tray of doughnuts, “What the f**k is that? I hate Americans.” Ariana went on a doughnut-gate apology tour afterwards, claiming, “I am EXTREMELY proud to be an American” and insisted her problem was with childhood obesity.

(News) DMX Has Passed Away at 50 Years Old