Everyone is still talking about Kim Kardashian West hosting SNL. She actually did a pretty good job. After posting the worst season premiere ratings in its history, “Saturday Night Live” hosted by Kim saw a 23% boost in ratings.

Kim Kardashian’s Saturday Night Live appearance featured some wild sketches. One called the “The People’s Kourt” had Kim portraying her sister Kourtney as a non-caring judge. In the skit, SNL cast member Pete Davidson did his best Machine Gun Kelly as he tongued down Chloe Fineman who was portraying MGK’s girlfriend Megan Fox. Kelly saw the bit and tweeted, “i think it’s time for me to come on the show as Pete @nbcsnl.” 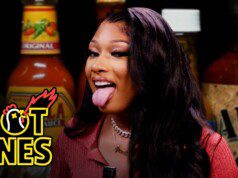