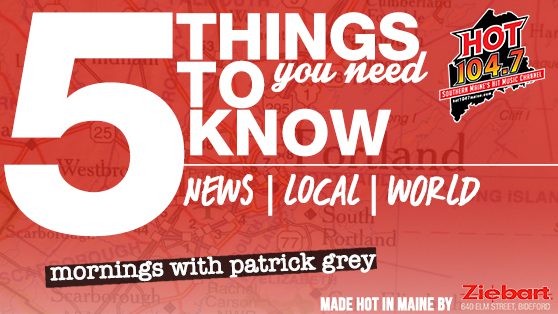 1. Say it isn’t so!!! Bacon can cause cancer? In a new report by the WHO, processed meats such as hot dogs, bacon, lunch meats, etc. can cause cancer. Are we really that surprised?

3. Very inspiring story from a girl out of Scarborough, Antonia Caruso. At one point, only weighing 90 pounds, Antonia struggled severely with anorexia. But she has taken that struggle and turned it into power… literally! She has dedicated herself and her body to becoming a power lifter. Now weighing at 120 pounds of pure muscle, Antonia is an inspiration to anyone struggling with loving themselves.

4. Two marijuana activist groups in Maine have joined forces. The Campaign to Regulate Marijuana like Alcohol and Legalize Maine are moving forward with one campaign. With a goal of legalizing marijuana use in the state, they will need a total of 61,121 signatures by January to get on the 2016 ballot.

5.  President Obama says students are spending too much time in the classroom taking tests, many of them unnecessary, and urged officials in the country’s schools to take steps to administer fewer and more meaningful exams. His plan limits standardized testing to no more than 2% of class time.

BONUS: Today is Black Cat Day! This feels appropriate in the spirit of Halloween, right? Though traditionally we see black cats as bad luck or mischievous, they are actually often overlooked at animal shelters because of this superstition! So, if you’re looking to adopt a cat, show the black cats some love too!