Hot Radio Maine Completes Rebrand and Now Reaches More Mainers than Any Other Station by Launching Statewide in Bangor and Lewiston/Auburn!

The new stations flip from playing Drake’s “Hotline Bling” on repeat and joins WHTP-104.7 in Portland and Southern Maine

Scarborough, ME – Mainestream Media’s WHTP-Hot 104.7 has completed a full rebrand launching this morning at 7:00am as Hot Radio Maine. In addition to the new branding and broadcasting to Portland and southern Maine on 104.7, the station has now launched on 100.3 FM in Lewiston/Auburn and Brunswick and 102.9 FM in the Bangor/Brewer metro.

100.3 FM in Lewiston/Auburn and Brunswick and 102.9 FM in Bangor/Brewer spent the last six days playing one song, Drake’s “Hotline Bling” on repeat as 207 Hotline Bling Radio. The stunt which garnered both local and national news attention went viral on social media platforms as listeners spent the week both intrigued by the stunt and having fun interacting with the station.

The rebrand, launch of the new stations and the stunt were the design of Hot Radio Maine’s Program Director Ryan Deelon. Deelon said “Our team had a lot of fun while working tirelessly around the clock to both create a stunt station and launch the new, rebranded, Hot Radio Maine. With the new signals, we now have expanded our brand to include half of Maine’s statewide population. You can hear our brand from the New Hampshire border to north of Old Town, Maine. We have the potential to reach more Mainers than any other radio station in the state!”

Hot Radio Maine established a successful brand in southern Maine by coupling a strong musical format with successful concerts and community-based events. Hot Radio Maine has given out thousands of dollars to local Maine listeners as well as other prizes, concerts tickets and even thousands of turkeys during Thanksgiving. The station has brought successful major recording artists to Maine including the Grammy nominated Post Malone, Khalid, J Cole and dozens more including the annual sold out Hot Summer series. This also included DMX in the summer of 2019 who went on to spend several days in Maine and attracted national news by buying gifts for local residents.

Hot Radio Maine’s top 40 format includes core artists like Drake, Ariana Grande, Cardi B, Post Malone, Khalid and more. Through extensive research the brand developed a musical formula that fills a wide-open void in the local radio landscape. Nearly all of the titles heard on Hot Radio Maine are exclusive to the brand when compared to other Maine radio stations. The station compliments hit driven music with LIVE and LOCAL personalities based locally in Maine. “At a time when the stations in Maine are piping in more and more programming from out of town and running national contests, we’re focused on being local to Maine listeners who listen here, live here and win our prizes here.” 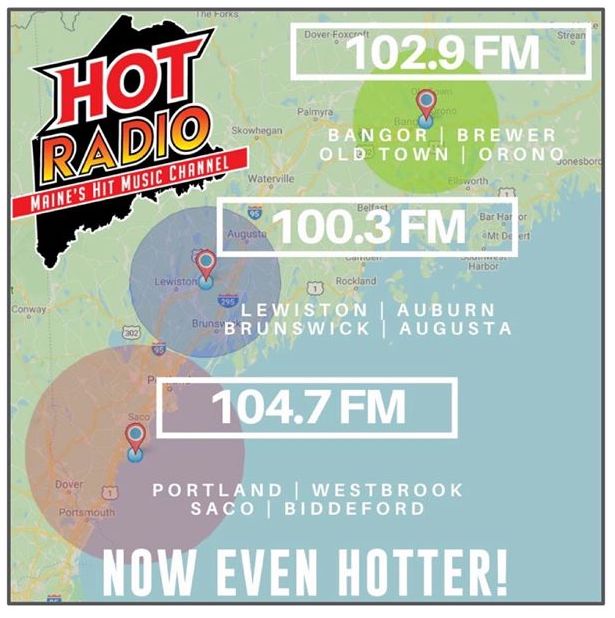 Shout out to everyone at the station who made this possible! Big things coming this year! Stay tuned 👀